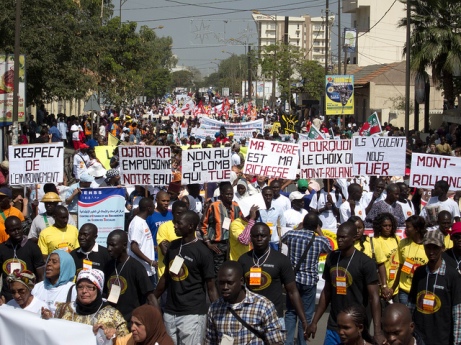 At the World Social Forum in Dakar the Commons were a major issue, which is easy to explain by only describing a few aspects of the relation between the current economic model and the commons.

– enclosure of the commons is going on – often in a subtle, silent way: through Free Trade and Investment agreements on a bilateral, regional and global level. Those agreements represent a “bill of rights” for investors, while paralyzing the state and its capacity to regulate and threatening the potential of communities to reform and to re-organize their lives. While Land-, sea- and earthgrab – aka as Geoengeneering – are easy to identify as enclosure of the commons, the same process is less evident when we talk about the commodification of the tinniest bricks of material and life, i.e about new technologies. We are down to the nanoscale. It is therefore a mistake to think, that the limits of the Earth itself will prove the short-sightedness of the paradigm of perpetual growth. The fact is, as Richard Feynman explained decades ago: „There is plenty of room at the bottom.“ The same holds true for biomass. ETC Group showed in recent report, that 67,3 % of the Earth’s biomass are not yet commodified and are now under attack. There is plenty of common pools resources to be commodified in the near future.

– the demand for perpetual economic growth as a built-in feature of the dominant economic model leads to perverse business strategies such as planned obsolescence. Those models are based on the exploitation of natural common pool resources and they systematically drive towards monopolization (the logic behind is „die or grow“, so whoever can will try to grow. There is nothing illogical in it.)

– the process of privatizing gains and socializing losses is very alive (the recent bail-out of banks by taxpayers money is just one of its examples). This process does confirm an historic experience: Within the current logic, both – Market AND State – tend to smash the commons. And common people have to pay for. This is not only dramatic for being essentially unfair. It is especially dramatic because – on a long run – this kind of enclosure of the social commons undermines and even destroys the capacity of communities to govern and protect their commons.

– there is a built-in flaw in the way capitalist democracies work: as Vermont Law Professor Gus Speth brilliantly puts it:

„I]n a capitalist democracy, the state is a dispenser of many valuable prizes. Whoever amasses the most political power wins the most valuable prizes.
The rewards include property rights, friendly regulators, subsidies, tax breaks, and free or cheap use of the commons…„

– there is a desperate need for a paradigm shift, a shift in the underlying core beliefs of how to organize society and of how to design policy based on those alternative core-beliefs. And we need to find a name for that alternative paradigm. I strongly believe, that if we want  to get out of the mess, the most important thing is to stop focusing on solutions to specific problems. We have to realize what it really means, that we cannot (yet?) rely on the State as a defendor or enabler of the commons.

It is more than important, to say NO and to resist the silent enclosures, but it is even more important to work on this urgently needed and relatively „simple“ shift in the way we look at this world. Ones we’ve done this we will be more sensitive to the millions of on the ground-solutions people create „at the edges“ of the dominating model.

As the late Raymond Williams puts it:

“To be truly radical is to make hope possible rather than despair convincing.”

For me, the commons represent hope.

At the World Social Forum in Dakar the commons were not yet discussed as a new paradigm  – instead they were present as „the Water commons“, as „natural commons“ and as „Knowledge Commons“ in different places. Each of the communities adressing the specific issue it feels comfortable with. This is a limit we’ll try to overcome next time, I was happy to find a lot of new allies in Dakar – from Mali, France, Bolivia, India or Brazil!

So, the proposal for the next World Social Forum in Porto Alegre is to propose the commons as a framing for the alternative paradigm (everybody talks about but only a few people try to describe), and to put this discussion at the very heart of the Forum. The idea is to design the commons debate in such a way that the whole power of the convergence of movements can really unfold.

At the GRAP Seminar, where I spoke with Susan George, Boaventura de Souza Santos, Joan Martinez Allier and others I could shortly present my ideas for how to describe the new paradigm from a commons perspective. Again,  I don’t really care, if you call it Commons; Commons Based Peer-to-Peer Economy or Solidarity Economy or Buen Vivir … I  care of the fact if people identify with the ideas, aims and core-beliefs described in the second column of the following table, which is an update of the one I recently published here (Many, many thanks to all those who with their comments contributed to further develop the table.) 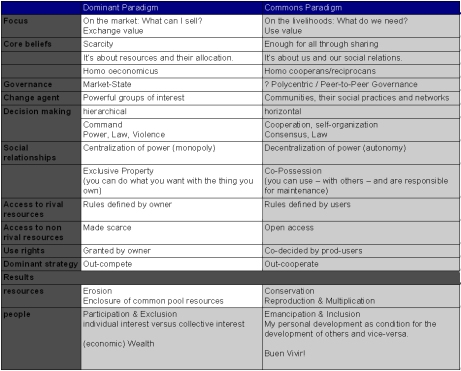