Commons and Infrastructure.* This is, IMHO, one of THE issues we have to deal with if we want to expand the commons. The following is a personal summary of the debates at the Economics and the Commons Conference (ECC, Berlin, May 2013). It will be published in two parts. The first one is based on the Keynote of the Infrastructure Stream at ECC (presented by Miguel Said Vieira; prepared by him & Stefan Meretz). While re-listening the keynote, summarizing their ideas and paging through my notes from the European Deep Dive, I added some of my own ideas and a few examples that came into my mind. The second one will be based on the discussions during the stream sessions.

Let’s start with a few quotes from the (pretty compelling) framing of the respective stream at ECC, which was called. „New Infrastructures for Commoning by Design“:

„Commons, whether small or large, can benefit a lot from dependable communication, energy and transportation, for instance. Frequently, the issue is not even that a commons can benefit from those services, but that its daily survival badly depends on them. … When we look at commoning initiatives as a loose network, it does not make sense that multiple commons in different fields or locations should have to repeat and overlap their efforts in obtaining those services (infrastructures) independently…“

We need to sensitize commoners about the urgent need for Commons Enabling Infrastructures (CEI). That is, we need infrastructures that

The good news is, that we don’t need to start from scratch (as we’ll see). Such infrastructures have always existed. They clearly CAN enable the creation and maintenance of commons, if they are designed for and if they are run by communities or networks. The problem is, that this crucial point is often dismissed – even amongst commons-sensitive communities. The talk delivered by Free Software advocate Eben Moglen at Re:publica 2012 shows in an almost dramatic way how even in the digital world we loose the fight on infrastructures.

It’s that simple. In other words: It is not enough to use free software and protect it by the General Public License. Legally protected Free Software remains technically and structurally vulnerable. If everything is run on enclosed platforms sooner or later these platforms (and those who run them) will cannibalize the freedom of users. Free Software needs free hardware and community controled infrastructures. If not, cooptation is right around the corner. (The Freedom Box project deals with this.)

„there are at least four critical factors that must be properly structured for the instructures to succeed:  the social organization of management systems, technical issues, system protocols and legal governance regimes. […] However, conventional economics discourse barely recognizes this distinction and usually treats infrastructure as a resource, pure and simple, with little regard for the actual or potential role of commoning.“ (from the Deep Dive protocol)

There are plenty of questions that arise when we think about Commons Enabling Infrastructures, questions such as:

* What could be the roles of the state – currently the main provider of infrastructures – and the market?

* How those actors conflict with commoning initiatives, and how could they be useful in infrastructures provisioning?

* While some emerging infrastructures have progressive dimensions (using distributed networks, promoting local access), they may be minor parts of larger, regressive infrastructures that still depend upon individual transportation, centralized power grids and concentrated industrial structures. Is this avoidable, and how so?

* Why is the issue so challenging? –> Because it is rather unexplored and because it transcends the issue of limits / size / scale.

* … and many others, feel free to add in the comments.

But first and foremost the question is: What is infrastructure at all?

Today, most existing infrastructures are related to commodity production, that is: they are market-logic driven, but the market provides only indirect (and very imperfect) indicators of societal needs; thus; many of the current infrastructures foster environmentally harmfull and individualistic behaviour. The lack of certain infrastructures does as well; just think about the public transport system vs the highway system in Germany. 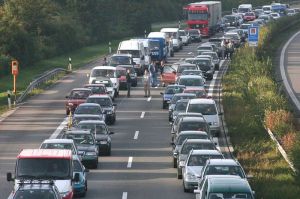 „These large energy, mining and infrastructure investments are frequently cross-border“ (Baker &Mc Kenzie) and set up as Public Private Partnership. This kind of infrastructure usually promotes and enables dispossession.

Therefore, the question is (again): How can the infrastructures be related to commons production? How can we promote and build commons enabling infrastructures? And how can we deal with the following challenges:

To, both, show where we are at and show what’s possible, here are a few alternative approaches (practices) to infrastructures:

1. Guifi.net – „the open, free and neutral network; Internet for Everybody“, which is a large and successful community built, shared and controled internet infrastructure; an example of it’s application: guifi.net.map. It is

„based on a peer to peer agreement that let’s anyone join the network by providing her/her connections, which in turn extends network connectivity to others.  Guifi.net is an independent network owned by commoners, but also constituted as a foundation that lets it dialogue with the state and market in order to have access to other infrastuctures (such as the electro-magnetic spectrum) and grow.“

There are other such networks based on common WLAN hotspots and a bit of antennas and software programming in Athen, Barcelona or Vienna. The European Union is funding research projects about their potential. Because, if

„many of such community networks are set up together they can form a distributed network, based on so called »Linux-Containers« (LXC). This would be a new and light-weighted, community-controled p2p form of enabling communication beyond the big corporations and based on computers of relatively low performance. ( CONFINE »Community Networks Testbed for the Future Internet«

Indeed, in post-Snowden times an infrastructure of free, distributed networkes to enable our (digital) communication seems more important than ever (see also Community-lab.net).

They could help spure commons based, distributed energy production by many countless projects and initiatives. But there is a similar problem as in the case of telecommunication: if those initiatives would like to exchange energy among themselves, they would need to use the market based grid → which makes them vulnerable. Moreover, the current trend favoring Smart Grids is not driven by commons but by the Green Economy idea which basically ignores the factor of excessive consumption. 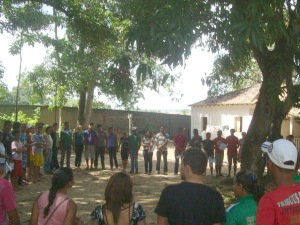 This is an example of a Public Higher Education Institute that offers technical and undergrade degree in agroecology and rural education. It is an interesting case that shows, how communities appropriate themselves of usually state run infrastructures. Paesent movements involved with land reform, indigenous people or quilombos are involved in student selection mechanisms, that is: extremely diverse communities, but usually pro commons and some of them even strictly commons based, sharing and producing collectively. Along with trade unions they pressured the State to set up the Campus. The land was donated by the Movement of landless people,  MST. The location choosen for the campus was particularly relevant as it is close to El Dorado dos Carajás where in 1996, 19 people were murdered by the police.

In a way the place of the Marabá Rural Campus is a battle ground between commons based initiatives and neo-extractivists. 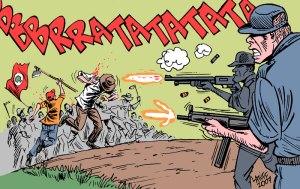 Carlos Latuff Cartoon about the massacre in El Dorado do Carajás; Images from Carlos Latuff are copyright free).

Marabá Rural Campus has small scale family farming, agroecology and food souvereignity as principles and blends them with research focussed on the communitie’s needs. One of their strategies is called: alternation pedagogy, that is students spend one third of their time in their respective communities; this allows for a process orientied learning and research, it minimizes rural exodus etc.

Btw; there is an interesting conceptual link to a recend article by Prof. Uwe Schneidewind (Director of the Wuppertal Institute) who calls for a citizen university concept in Germany. We need to commonify education. Pioneer work we can build upon is done in many places; on example is the Future-Foundation Eduction of the GLS-Trust) This will be the main pillar of commonifying public services and infrastructures.

… infrastructure as a commons can include car-pooling and car-sharing, achieved through a distributed sharing of transportation needs and routes. Shared cars could have preferred access to key roads. In Tallinn, capital of Estonia, a system of free public transport was recently instituted that lets registered residents of the city use the system at no cost, while visitors from other parts of the country and foreigners must pay. The idea is that citizens have already paid via their taxes for the transportation.

So, it seems to help densifying urban spaces which to a certain degree is desperately needed to leave the urban surroundings untouched.

Urban planning and public spaces can be considered infrastructure as well. And from that perspective, urban gardening or urban agriculture are attempts to reclaim spaces that have been taken over by development and/or abandoned.  Other approaches to convert urban infrastructure into Commons Enabling Infrastructures (CEI) are social housing projects or Community Land Trusts. To mention just two examples out of many: The Ca La Fou in Spain (Catalunya) – “Colonia Ecoindustrial Postcapitalista – is an industrial colony that has built low-cost housing that is own, managed and governed by the community.  And the Community Land Trust in Brussels developed organizational forms (the trust) to convert urban land and housing into something used and stewarded by the communities themselves on a pretty ambitious scale.

Obviously in all those areas there are plenty of tensions:

But once we conceive Commons Enabling Infrastructures in a clearer way, once we understand, why they are so crucial to expand the Commons  and how many thrilling initiatives can be (already) connected to each other, once we have a more commons-friendly environment in which these experiments evolve, each project can focuss with major strenght on these issues which won’t disappear but can be commonly addressed and resolved.