Urban commons is an issue that currently gains relevance! Research projects and public events are popping up everywhere and much is going on „on the ground“. There are „1000 underground urbanisms“. Therefore I am glad to publish this guestpost by Verena Lenna about a thrilling urban commons project in a european capital.

Commons Josaphat: an episode of political urbanism in Brussels

The fascination for a concrete utopia gathered around forty inhabitants of Brussels during the last week-end of August 2013, for an act of collective imagination about the future of 24 hectares of land in the heart of the city, terrain vague despite the numbers of plans previously proposed. Commons Josaphat is the name that emerged to summarize the different activities organized with the purpose of enabling and articulating le bien commun in Brussels.

The pretexts is a site close to the beautiful park of Josaphat, in the municipality of Schaerbeek, owned by SAF (Societé d’Acquisition Foncière), thus nominally belonging to the region of Brussels and classified as one of the 13 areas of the city defined as ZIR (zones d’intérêt régional/ area of interest for the region).

Two bridges over the rails give full visibility to this strip of land. Nevertheless some inhabitants of the neighbouring houses have actually a blurred idea about the existence of the place, hidden behind the curtain of houses and trees. Crossed by the rails, the site is divided into two parts: one part covered by sand, the other by the flowers planted as part of the cleaning operations for the area. It could perfectly become an example of Tiers Paysage: at the moment it is a good site for informal activities, for dog walking or for temporary occupations, as Les Nouveaux Disparus1 are doing in these days.

Almost at an emotional level, Commons Josaphat has been developed based on the belief that taking action is the best option to change the course of things; it moved the minds and the hands of people towards a common goal of a reclaimed bio-authoriality2, of a reclaimed space and time. 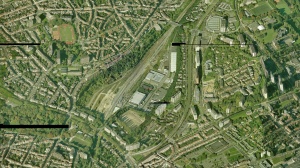 [fig. 1] A 3D collage, reconstructing an aerial view of the site of the ZIR Josaphat. Graphic elaboration: Verena Lenna

The dimensions and the opportunity this terrain offers push people’s imagination. Its emptiness is probably more required than the full functionality of many public spaces. However, in the present economic and cultural circumstances, imagining another world is almost imposed, and it is triggered by the available tools to take action: from the web based organizational platforms to the repertoire of community based experiences and initiatives which have been proliferating in the last years, under the regime of dysfunctional welfare states. Despite the fragmented – depicted as „flexible – world in which we are supposed to live, immaterial commons are constantly being reproduced, especially in urban spaces (Hardt and Negri 2009), and sometimes they find the way to gain consistency.

In this spirit, five thematic short workshops coagulated concepts of any scale and sort, symptomatic of what the inhabitants of Brussels need for their wellbeing, probably inefficiently provided by the institutional forms of welfare: common or co-operative housing formulas, right to water and environmental sustainability, collaborative economies, free culture and creative commons, public space and open space, mobility, the role of design in order to interface the different inhabited realms. Transversal to these, issues concerning property, social impact and the decisional patterns have been tackled. Concerns of scale, the inclusivity of the site and of the processes shaping its evolution emerged. In short: political and ecological awareness characterized both the discussions during the two days and the proposals for the future of the site.

Attracting inhabitants from very different parts of the city – not only from problematic neighbourhoods – Commons Josaphat declared the nature of the site as bien commun of the whole Brussels. The episode is revelatory of widely spread feelings and needs: as in thermodynamics, a saturation point revealing the temperature of a system close to a state change.

Commons Josaphat is not an unprecedented experience to reinvent the city. But it urges to reconsider the political role of urbanism. At the origins of urbanism (Benevolo, 1974), the concern for the perverse spatialization of a sick system first of all produces a critique: the space of the city is thus addressed to operate reparatory interventions embracing a whole society and its organizational layers. Despite the neoliberal turn, a critical urbanism approach instead of having disappeared has actually abandoned the institutional realms. The hypothesis is that it is still active, but dissolved in a thousand underground urbanisms, hidden in the resistant folds of our society, where space – arena of the political par excellence – still supports the performing of protest, of resistance, of alternative organization, as it has been the case of the site of Commons Josaphat.

[Today the activities for the re-appropriation of the site are continuing and organized by different GT (Groups de Travail/ Working Group). The ensemble of people converging for this purpose has defined itself as a collective, of whom a part is progressively consolidating and another is growing, as a manifestation of an increasing interest.]

1 a nomadic acting company, created in 1994 in Brussels, with the aim to expand the accessibility to culture.

2 the term refers to the possibility of individuals, dispossessed by the post-fordist regime of production and its regulating devices, to re-gain control over the biological and organizational rhythms. The myth of flexibility, the fragmented spatial organization of activities deprive workers of their time and space, + they are dispossessed by exclusive forms of property. In fact, the crisis of Unions was originated with the shift to post-Fordism, as a fragmenting condition of labour based on flexibility aka precarity. Precarity powerfully disconnects the body from life and the individuals from a their community. In this perspective any form of activist, political urbanism developed by people in their everyday life is a direct form to reclaim space, time and their lifelyhoods.